A family home designed as a village strung along a garden path.
West Bend House was conceived as an inhabited pathway, a means to traverse the long narrow site from street to expansive rear garden with views over the banks of Merri Creek. We wanted to give this family of five, with children quickly becoming young adults, the ability to be independent and have time apart but also create varied spaces to come together that were not necessarily constrained as living or dining spaces. Giving all members of the family spaces to be apart and spaces to be together. Therefore, the house was developed as a small village of clearly defined sections that are arranged along internal and external pathways from front to back. 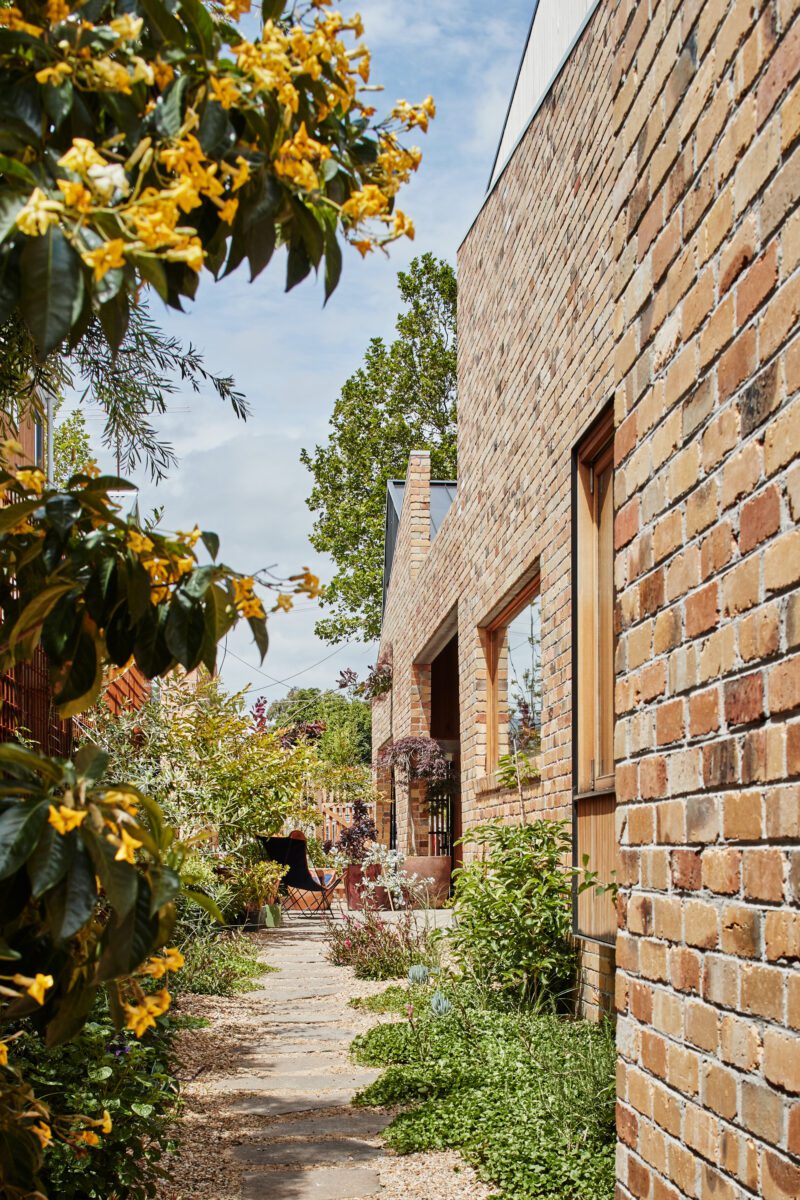 The site was the location of the first home in Northcote, which faced the north rather than the later street. We referenced archival photos of the homestead façade to the north and diminished the scale of the home to both the street and the rear garden.

Located on the banks of the Merri Creek on a long north south site we wanted to create indoor and outdoor pathways through the site towards the garden and mid distant view of trees along the creek. We also considered it important to create a public visual corridor from the street to the creek.

A home needs possess two almost diametrically opposite traits. They need to be the Shelter and the Stage for the families that live in them. This was the key concern of West Bend House, how to nurture the very independent lives of the individuals that live there but also provide a variety of ways and means that they could come together with each other and friends. This was achieved by large range of social spaces that vary in scale and connections to each other social spaces or with more private zones of the house.

Long term familiarity with the family, we have designed another house for them, combined with a detailed and comprehensive predesign and briefing phase meant we had a detailed understanding of what was required. The complexities of both parents mostly working from home but wanting to share work spaces with the kids rather than being shuttered off, the organised and impromptu art-band rehearsals, the needs of a larger than life teenage son and those of two closer in age sisters, the need for an active village life with friends and neighbours actively encouraged to drop around for no reason at all.

The house is not connected to mains gas and is run entirely from sustainably generated electricity. There is a 9KW solar array on the roof connected to a battery in the family entry. The power generated is used in the home and also for charging the EV. All water heating for heating and hot water is provided by highly efficient heat pump systems. The appliances are high efficiency low power low water use type. High performing timber windows and doors. Sliding door fitted with lift and slide sealing. Windows for passive ventilation are tilt and turn. Water from the roof is collected and used variously for flushing toilets, in the laundry and for landscape irrigation. The bricks are reclaimed, in the less popular cream range rather the reds. External timber is sustainably harvested and milled Silvertop Ash. Internal timber and veneers are FSC certified. Orientation, overhangs and thermal mass are optimised for passive heat gain in winter. Thermal mass is further utilised for summertime temperature moderation.

Antony designs spaces that are beautiful to live in and also manages every stage so well that the whole design and build process is a pleasure to be part of. We’re still amazed at how well the spaces in our house work. Every room and all the in-between spaces link perfectly, and somehow have outlooks and sky and tree views that hardly seem possible in the middle of the city.  I have absolute confidence in his judgement and skill at arriving at wonderful outcomes. He even manages to do this while remembering the budget we need to work to.

Antony is an architect who designs spaces for people and life. His ‘aesthetic’ is grounded in use. The materials, lines and dimensions always look great but you feel his true sense of design when you live and move through the spaces. There is a warmth to his work and a real sense of architecture supporting experience.

2022 Houses Awards
Shortlist in the New House Over 200m2 category

Previous
Next
All Projects